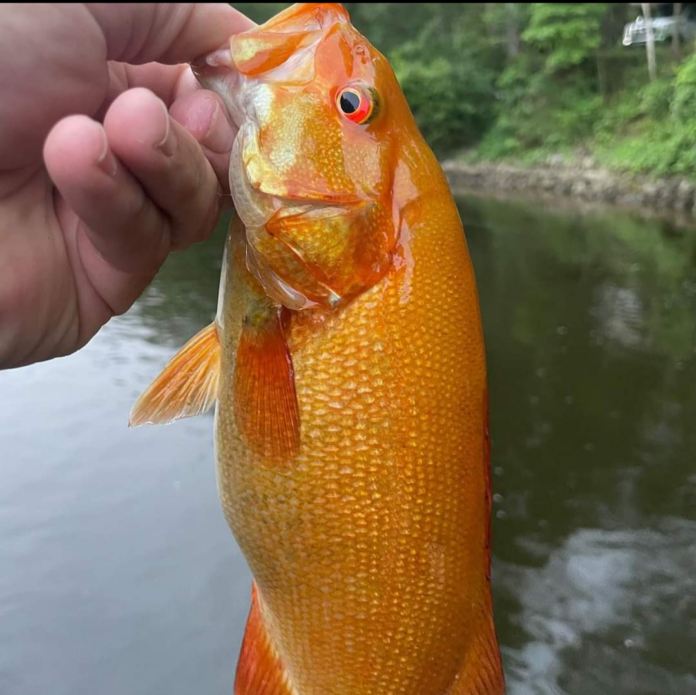 NEWAYGO, MICHIGAN – Sometimes there is a fish that is caught that is so unbelievable it’s surrounded by the question over and over again until the outcome is all the same. This is not a Photoshop trick. Josh Chrenko from Indianapolis Indiana caught an orange smallmouth bass!

Josh was fishing on the Muskegon River in Newaygo, Michigan when he made his amazing catch. Josh told WON how it happened: “I was on the river and just started throwing a buzzbait. I get the first bite of the morning, started reeling it in and noticed something orange hooked on my bait. My first thought was this: a goldfish or maybe a traffic cone with a tail?

I had no idea what it was until I pulled it out of the water. It was evident that it was a smallie though. I’ve caught over 10,000 smallmouth in my life and never seen anything close to this.

I’m also sort of a smallie junkie (I founded and co-host Smallie Talk Podcast), so I’m pretty surrounded by the smallmouth community and had never seen a picture of a fish like this. So I knew it was rare. I checked with a buddy of mine who is an ecologist and he told me what he thought it was. I’ve since confirmed that it is a smallmouth that has Xanthism.

That is a very rare genetic mutation, similar to albinism, that happens to fish and other animals that will actually turn the color to a yellowish shade, but in this case a bright neon orange. I still couldn’t believe that I put off all the anglers in this area and caught probably one of the rarest smallmouth bass ever…

This is one true fish of a lifetime that I will probably never get the chance again to see. So, after a few pictures there was only one thing left to do. Set this fish free to go as big as possible!”

Even though this was not caught in California, we definitely had to find out more. The first thought was that it was definitely Photoshopped. Then we saw Josh’s release video of this fish and without any doubt this was 100% legitimate. Josh really did catch a “legendary” bass that is in a lot of fishing game as the end-boss trophy fish.

The odds of this fish even making it to adult size is astounding – mainly due to its high visibility to predators – but sometimes when all the stars really do line up, amazing things can happen in nature. Congratulations on the fish of a lifetime, Josh.