Sportboat anglers battle for cash and prizes, landings and crew for bragging rights

POINT LOMA – The San Diego Offshore Jackpot (SDOJ) will dominate the waterfront surrounding the Scott Street sportfishing landings in Point Loma, June 23-24. It will be the 8th-annual running of the popular sportboat event in which anglers compete for combined-jackpot cash and huge sponsor prizes on overnight tuna trips on some of the finest vessels in the fleet.

Speaking of the boats and landings, the SDOJ is very much a competition between the captains, crew and landing staff who are looking to take (or hang on to) the perpetual trophy that will reside in the winning landing’s building for the next year. Securing bragging rights on the waterfont is also held in high regard in the vicinity of Fisherman’s Landing, H&M Landing and Point Loma Sportfishing who holds the trophy for the time being.

Anglers will jump on an overnighter on one of at least five boats out of any of those landings and shoot for the largest qualifying fish and a shot at a huge “combined jackpot” with cash going to the top three finishers. Find out how to enter on our dedicated tournament page here.

The SDOJ is rooted in WON’s long-running success within its diverse charter schedule which led to similar boat vs. boat, combined jackpot events like the Rockfish Rumble, Channel Islands Shootout and Central Coast Lingcod Championship. These are all products of WON’s mission to bring the competitive, tournament environment to sportboat anglers. As the saltwater sportfishing capital of the world, San Diego playing host to such an event featuring top-notch boats to go along with overwhelming sponsor support was a no brainer.

A $330 ticket puts an angler on the Producer, Old Glory, Condor, T-Bird, or Pacific Islander and that includes $20 toward the jackpot. Vessels historically fill up quickly as the offshore fishing trends further in the right direction. So, if you want to get on a specific boat, registering sooner than later is the way to go. The Pacific Islander out of Point Loma Sportfishing has already sold out.

Based on five full boats (118 anglers), the combined-jackpot payouts for the top 3 fish would be $1,180 for first place, $826 for second and $354 for third. Find out more on the official tournament page here.

Daiwa is also back with its popular “Fish Daiwa and Win” contingency program which is a very popular elemente of the SDOJ. The way it works is, anglers finishing in the top 3 using a Daiwa Proteus or Proteus WN rod or Saltiga level-drag, star-drag or spinning reel will win a $1,000 Daiwa shopping spree. If an SDOJ top-3 finisher was using Daiwa J-Braid or J-Fluoro, they win a $500 Daiwa shopping spree. To qualify, keep the receipt indicating the purchase of any of these products between Jan. 1, 2022 and June 23, 2022, present that receipt to the Daiwa staffers at the SDOJ check-in, finish in the top 3 and score!

Like all Western Outdoor News events, the SDOJ is powered by generous sponsors, and they’re some of the biggest names in the sportfishing industry: Daiwa, Costa, HUK, Plano and Igloo are among the supporters in 2022. One fun wrinkle to their involvement is, in many cases SDOJ organizers leave how their products are awarded at the sponsor’s discretion. Check out the SDOJ sponsor content in this special section for more details on that!

Here are some key details on how the SDOJ works:

This is a BIG FISH tournament in which each angler is entitled to submit ONE fish for prize money (and no troll fish). Each captain is responsible for determining the Top 3 biggest fish from three different anglers at the end of the day. If there is any question as to who are the Top 3, the captain can keep as many as is needed to be weighed at the dock. All other fish can be filleted on board.

All fish being weighed in must have been caught by the angler submitting it with no help beyond reasonable assistance from other anglers or crew. The eligibility of any fish should be determined by Captain, crew, or WON associate on the spot. No “hand-offs” will be eligible for prizes.

The captain is solely responsible for ensuring that all anglers do not fish past the “lines out” cutoff and that the boat is back at the dock by 7 p.m. If any boat is late for the 7 p.m. weigh in, all anglers on board will be docked 1 ounce for every 5 minutes the boat is late — no exceptions. After 30 minutes (7:30 p.m.) that boat and all anglers will be disqualified. This is to make sure we do not keep 200 anglers waiting at the dock.

At the dock, WON will weigh the top 3 fish from each boat, and will determine the top 3 overall. Each fish will be weighed ONCE on a certified scale down to hundredths of a pound. Those top 3 anglers will win 100% of the jackpot money ($20 per angler), with 50% going to first place, 35% going to second, and 15% going to third. All three winners can be from the same boat, but no single angler can win more than one of the top 3 spots (hence one fish per angler). In the event of a 2-way tie, WON will flip a coin, with the loser being bumped down one spot in the standings. In the event of a three or more way tie, WON will do a random drawing to determine first, second and third place. 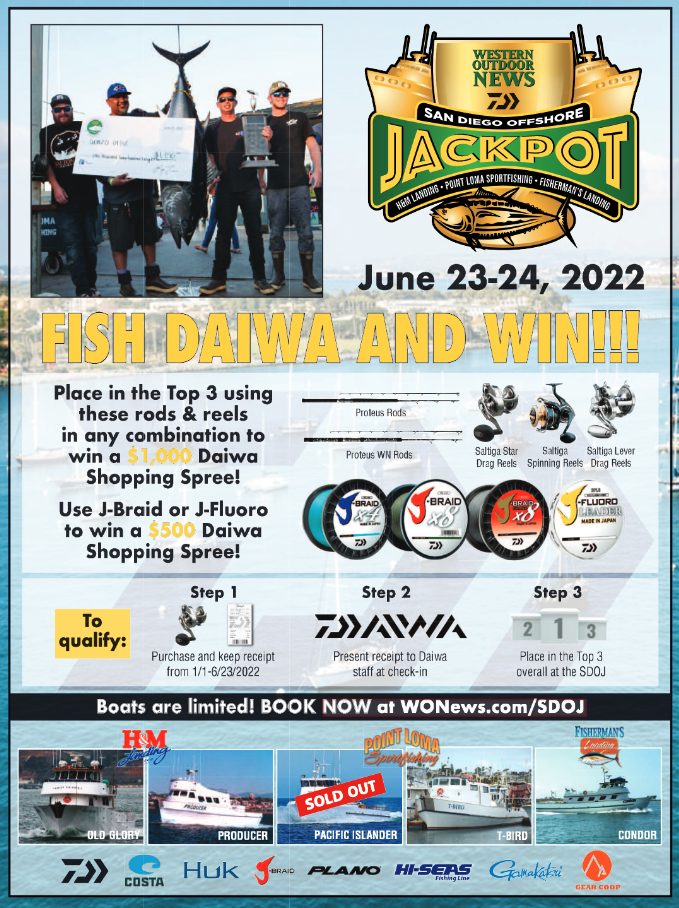 Last year, the top three fish tipped the scale at well over 100 pounds each, and the perpetual trophy went to Point Loma Sportfishing after spending the previous year at Fisherman’s Landing after they claimed it in 2020.

The winning fish was a 178.8-pound bluefin tuna caught by Corona angler Gonzo Ortiz aboard the New Lo-An out of Point Loma Sportfishing. This was his fourth appearance in the SDOJ and he hooked that fish on a 250g Daiwa Zakana Jig early Saturday morning.

By the time the crowd cleared following the weigh-in, awards and raffle on Saturday night, Ortiz was holding a check for his share of the $3,500 jackpot total that’s distributed to the anglers catching the top 3 tuna in the SDOJ, Costa sunglasses and a $100 gift card for Huk Performance Fishing apparel for nabbing the big fish on his boat and a Daiwa Proteus rod and Saltiga reel combo for catching the biggest fish out of the landing he fished out of.

The victory for the New Lo-An was its third since the SDOJ kicked off in 2015, and that includes back-to-back wins in 2017 and 2018. Captain Adam Williams was at the helm of the New Lo-An for this year’s event when the trophy was reclaimed for Point Loma Sportfishing.

The second place winner was Ricardo Guttierrez of Oxnard who knuckled down on a 174-pound bluefin aboard the Tomahawk out of Fisherman’s Landing who sent down a sinker rig on 130-pound leader. There were rumors that a 200-pound tuna was being brought to the docks by the Tomahawk, but the scale proved otherwise this time around. Guttierrez’s fish was good enough for 35 percent of the jackpot total. He also picked up a Huk gift card and Costas for the big fish out of his landing of choice.

That was far from the extent of the Tomahawk’s showing in 2021 as she also landed the third-place fish. Angel Garcia of Baldwin Park used a Daiwa SK Jig in connecting to his tuna that would ring up at 165.2 pounds good for $525 cash. It’s also worth noting that a 120.6 pounder was also weighed in by the Tomahawk which stood as the fourth-biggest fish brought to the scale in the entire event. The New Lo-An’s second- and third-biggest tuna went 113.4 and 108.4 pounds.

The Scott Street landings overlooking the docks that represent exactly why San Diego stands as the sportfishing capital of the world serve as the perfect backdrop for an event putting Southern California anglers on a level playing field. Adding to the setting are anglers showing up to jump on their own trips that night, or heading up the ramp to pick up their fish at the landings and general foot traffic who can’t help but stop and take in the spectacle. It’s really all the elements that make West Coast sportfishing and its deep history so special, encapsulated in one scene.

The landings are handling all of the bookings online, so anglers interested in fishing in the SDOJ should visit the participating landing of their choice, find a qualifying boat doing an overnight trip on June 23-24 and show up ready to check in and fish on June 23. You can find some general info on the tournament here, too.