Click HERE for the 2022 Grunion Run Forecast, Dates and Times

The first grunion run is coming up in mid-March in Southern California, marking the start of the saltwater fishing season for many. This is because the grunion runs act like a mobile buffet truck, kicking into life many predatory surf species that like an easy meal; halibut, rays, sharks, croaker, surfperch etc.

Grunion runs, for the uninitiated, occur when vast shoals of the sardine-like grunion (Leuresthes tenuis) congregate just offshore on certain moon and tide cycles, working their way up to the sandy shallows as the tide comes in. The females carve out a small hole and lay their eggs at the top of the night’s high tide just where the waves end and the sand begins, with the males fertilizing the eggs in situ before flopping and squirming their way back to safety as the water retreats.

This cycle is repeated roughly every ten to 14 days or so, generally on a new, half and full moon. This is because the aforementioned moon cycles generate the larger high tides, which suits the grunions tactic of laying eggs in the sand at the high tide mark and leaving them to mature until the next big tide cycle plucks them from their sandy hole and returns them to the ocean, whereupon they begin their journey to become adult grunions. Sex, sand and summer – what a life.

Grunion runs are listed as occurring over four nights, with conventional wisdom dictating that the last half of the listed dates are the best for grunion hunting as the run picks up. The run times coincide with the high tide that day, so hunts can be planned fairly precisely. However, whilst the timing of the run is well-known, they locations of the runs aren’t as easy to predict. Pretty much any open, sandy beach in Southern California will have runs at some point and every stretch of coast line has its favorites. Ask around and it’ll soon be clear which ones feature consistently and are worth targeting. Things to consider are beach access in the 10 p.m. to midnight slot when runs often occur and the no-take months of April, May and June. For a full list of rules and regulations, including details on the new 30-fish bag limit, head to www.wildlife.ca.gov/Fishing/Ocean/Grunion

The grunion run’s impact on the quality of the fishing is an interesting subject. Looking at the basic facts of the run, it’d be easy to think that simply being on the beach at the time of the run will lead to a wide-open session for all species. In my experience, this isn’t quite true. Let me explain why.

Many predatory surf species are triggered to feed and move by tidal shifts. They use the moving water to find food and scent trails, rather than roaming aimlessly to find food at night. The grunion runs revolve around late-night high tides, often in the 10 p.m. to midnight range, meaning fish like bat rays, soupfin and leopard sharks are hunting exclusively by scent at this stage. At high tide – peak grunion run time – there’s very little water moving in or out, meaning the predators just aren’t on the hunt right then. The grunion can have a party – good work, evolution.

However, when that water turns and high tide turns into an outgoing tide, also known as an ebb or ebbing tide, it’s a different story. Those predatory species are then triggered to swim up that scent trail enhanced by the outgoing tide, with the moving water making finding food much easier. This normally happens just as the run is ending, which can be way beyond the hours most sane fisherfolk keep (think 1 a.m. to 4 a.m. to hit that peak moving water slot after a late-night high tide)

As those grunion back off the beach with the outgoing tide, the combination of a mobile shoal of feeding and mating fish pumping out scent and movement plus water shifting will trigger those predatory species into action. After many nights of fishing in grunion runs, I’ve observed that big bat rays are often the first species to turn up at this point. Bat rays love the slack water around the high tide period and will come close to shore to graze on whatever the find, but on grunion runs they specifically seem to turn up at precisely the same time. I’ve been on a beach many times when, within minutes of spotting a grunion run starting, we hook up on a big bat ray. You can imagine how easy it is for them to swim around and hoover up spent grunions.

As that high tide slack turns into an outgoing tide, this when the other predatory species really kick into gear, particularly surf shark species. However, as this is normally outside of reasonable fishing times (think early hours of the morning) this bite isn’t one to regularly target if you have a life outside of fishing.

The good news is that the fishing in the days before and after a run is usually top-draw. By dialing in that same tide cycle that brings the grunion up the beach, only a few days before or after so those peak times with the water moving occur earlier in the evening or around dawn, the bite can be as productive and your family won’t hate you for returning home at 4 a.m. covered in bat ray slime and grunion juice.

To be precise, when I talk about peak times in relation to tides, I mean those times either side of the high and low tide slacks where the water is moving in or out of the area you’re fishing. Moving water triggers predators like sharks into action because they find it easier to find food and move at this time, compared to slack water. Typically, this peak tidal movement occurs an hour or two after, and before, high or low tide. So, with a typical grunion high tide coming in at 10 p.m. to midnight, you might look at a high tide a few days earlier, around 8 to 9 p.m., with that bite-friendly peak incoming tide occurring around dusk in late March, say 6 to 7pm. Or maybe the high tide is in the early hours and the peak outgoing tide kicks in at dawn. These would both be great times to fish either side of a run if you’re not keen on a very late night but still want to make the most of a run.

Next, let’s explore some basic tactics to deploy during a grunion run. With the water temperatures up, swarms of baby rays and small critters will likely be interested in anything fresh and bloody you send out, so go big with the baits to avoid the nuisance fish. Think a large chunk or head section of fresh (never frozen) mackerel, bonito, croaker or surfperch. Grunions are not the best bait; they’re small, delicate, unpredictable to find and take is prohibited in certain months. A better strategy is to turn up to your session with a dozen fresh mackerel, some croaker or bonito on ice, rather than hope the grunion show up.

So, let’s say you’re running half a fresh mackerel on a twin-circle-hook pulley rig (a reliable surf fishing set-up for predators) with a proper Sputnik-style surf sinker and wire leader. Tackle-wise, the big lesson is this: don’t go under-gunned as the grunion runs can attract some really big fish. Those big rays and surf sharks will test your equipment to the max and I’d fish with nothing less than a 6500-size spinning reel, or conventional equivalent, capable of running 30 pounds of drag (a Penn Battle III 8000 DX or Penn Slammer III 8500 HS are the current weapons of choice), 50-pound braid main line, 12-feet of 80-pound mono rubbing leader and a rig equipped with 130- to 170-pound wire. Anything less than that and those big rays will disappear off to the horizon, whilst the soupfin and big leopards will expose any weakness in your set-up. Don’t use mono as a bite leader or you’ll leave hooks in fish. Recast and rebait regularly to get those fresh scent trails laid down in the current and you will get bit, especially if the vast shoals of grunion are in the area.

If you’re targeting species like halibut, often in the days before or after the run as you would with the larger predators, your go-to baits are a lot simpler in that a grunion pattern lure (jerkbait, swimbait or jig) is all you need to match the hatch. Glow-in-the-dark baits are also gaining popularity. Expect lots of big croaker and perch, too.

So, that’s my take on grunion run fishing. Get it wrong and it can be surprisingly slow. But, get your timing and tactics right, and you’ll likely find yourself attached to something large and toothy this spring and summer, and catching and releasing a big fish from the beach is as good as it gets in my opinion. 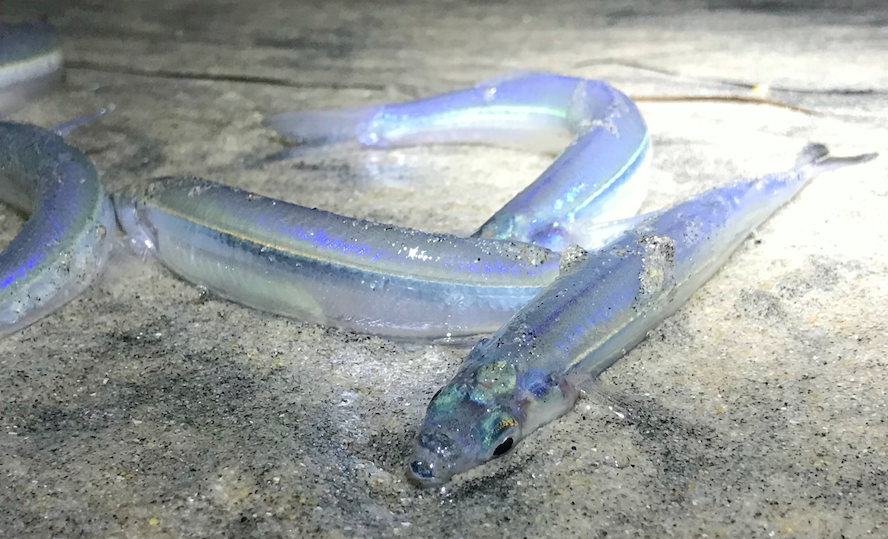