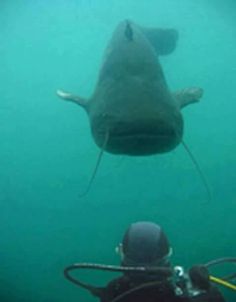 “They say he’s five hundred pounds of bottom-dwelling fury, don’t you know. No one knows how old he is, but if you ask me, and most people do, he’s a hundred years if he’s a day.”

―The Legend of General Sherman

Urban legends have always been fun, and in an activity so universally known for participants stretching the truth, it’s only natural fishing would have some of it’s own. While they’re entertaining to talk about over pale ales, The scariest element of one particular tale is how many of you still consider it fact. I think the first time I heard the tale, I also bought it, but that was back in my very early adulthood when I thought barracuda were the ultimate gamefish and eating pizza four nights a week was a great idea.

So here it is: that story about the divers going down to work on the dam that ran into absurdly ginormous catfish? Umm, No.

The first time I heard it, I was working in a tackle shop and a customer hit me with that one, and the setting was Lake Poway. It has a dam and catfish. The deepest water (where a man-eating whiskerfish would likely hang out) tends to be near dams, and it seemed like the likelihood of a diver’s eyes playing tricks on him in that particular lake’s gin-clear water was unlikely. So why not?

I spent five years in tackle shops, 25 between then and now connected to the sportfishing industry in one way or another and even more as an angler, and I’ve heard this same story only taking place in different locations and involving catfish in sizes varying from “full-grown man” to the Griswold’s station wagon. So, while I may have tagged it as “possible” the first time, it didn’t take long to come to grips with reality on that particular yarn.

For years after that realization, I’d let folks start telling story only to have me interrupt and finish it. They’d look at me in amazement and then stick to their guns as if it was gospel. After all, there was a good chance grandpa was the one who told them, and who’s going to argue with him?

After years of having fun with it, I had to draw the line when the tale (which according to Snopes.com, a great resource for debunking just about any old wife’s tale you can think of, said dates as far back as the early 1950s and has included other species and my beloved Eastern Sierra.

In an online conversation about the trophy brown trout fishery that is Twin Lakes in Bridgeport, sure enough, a dude checks in with how Navy divers (no dam to work on, so, the military gets involved in this one) spotted world-record crushing browns in its depths. He assigned a weight class to the alleged beasts, and that number escapes me, but I do recall thinking the size would rank as a yellowtail or white seabass of a lifetime for even the hardest-core Pacific anglers.

I was unable to fight off the urge to comment and with a level of smarm and sarcasm you’re probably already detecting while reading this, I responded with something along the lines of, “no they didn’t.” It being the Internet, I’m sure you can imagine how the conversation devolved from there.

Speaking of the world wide web, Snopes.com even had a couple dated examples “collected from the Internet” to feast on:

1998: Skin Divers, while cleaning out the intake to the power plant, had to be rescued from the murky depths by EMS crews. Found floating and unconscious, (one of which was in a coma for several days), they reported catfish so large that one of the divers was sucked into the giant bottom-feeders mouth, only to be spat out.

2000: There is this lake near where I live that is dammed up. The dam repairman goes down to fix/check for cracks in the dam. He sees a HUGE catfish that could swallow a Volkswagen Bug whole. He comes up from the murky depths of the lake and never is a dam repairman again.

Then the site’s researchers touched on the aforementioned variations of the story:

Various locales have been given as the location of the mythical catfish: quarries in Georgia, lakes in Texas, the Colorado River, plus less specific sightings naming only the state. The legend moves around, and has been told for decades as a true occurrence that happened locally throughout the southern, midwestern, and southwestern United States. In rare tellings, the fish will be described as a carp or pike.

Snopes also suggests the divers-and-catfish encounter is the “rural counterpart to the “alligators-in-the-sewer legend,” which I have never heard but it seems pretty self-explanatory.

Oh, that quote at the top of this column about “General Sherman.” That comes from a classic episode of The Simpsons in which a 500-plus-pound catfish allegedly resides in a small-town lake. There’s even a dark, blurry photo in the local service station that’s an obvious nod to the well-known hoax photo of the Loch Ness Monster. Homer Simpson ultimately and accidentally hooks Big Sherm and gets dragged off a pier and into a boat. He eventually brings the big fish up where he can knock it out with an oar and bring it aboard, but he later decides to let him go.

“Well, one fella came close [to catching General Sherman]. Went by the name of ‘Homer.’ Seven feet tall he was, with arms like tree trunks. His eyes were like steel. Cold, hard. Had a shock of hair, red like the fires of Hell…”