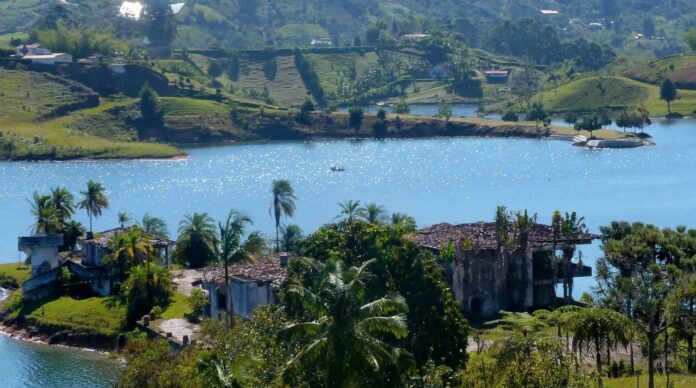 It’s bass tournament season, and for most of us that conjures up images of angling rockstars grip-and-grinning largemouth while collecting a big paycheck or two. For me, however, the thought of bass fishing doesn’t take me back to some pro tournament or idyllic childhood chasing ditch pickles — it takes me to Colombia and Pablo Escobar’s lakeside holiday home.

My plans to spend Christmas in freezing England were shelved and, with a cousin living in sunny Colombia, I booked the cheapest last-minute ticket I could find. Some serious fishing was in order. My flight was so cheap because it was with Aeroflot, the Russian national carrier, but they offered the cheapest route to South America so I was fine with a three-part flight on a cavernous converted cargo plane, first stopping in Paris before landing in Bogotá and then connecting to Cali. I carried everything I needed on my back: huge pack full of tackle with some clothes to pad it out, plus hard-tubed fishing rods.

Arriving in Cali after two days travel coincided nicely with Christmas day, so we sat by the pool and ate fried pork and plantain for a day before packing our kit into an ancient Land Rover and heading for a riverside lake we’d heard rumors about. The riverside bit is important as I was very focused on big Amazonian predators — catfish and arapaima gigas (pirarucu) — and the arapaima, in particular, favored lagoons and lakes connected to river systems where they can have an easy life and their fill of easy prey.

Arapaima also breath air, being a member of the ancient boneytongue family of fish, which makes them particularly adept at hunting in low oxygen water, but this is also their Achilles heel as they are relatively easy to locate when they surface to breath air. You can’t really miss a dolphin-size creature sticking its head out of the water in a small lagoon.

So, after about 20 hours of bouncing around in a 1970s Land Rover that overheated every hour or two and was equipped with a tape deck and just one tape’s worth of reggaeton’s greatest hits, we arrived at a small village built around a river and lagoon system that looked pretty much perfect for our target species. After a minute or two of standing by the water, we saw a giant scaley head surface under some far-bank bushes. After four days and 6,000 miles, that was a welcome sight.

I quickly rig up my heaviest rod with a heavy spinning reel — 60-pound braid and 200-pound Kevlar bite leader with 10/0 hook, adding a chunk of fresh fish gills as bait. I test the rod gently before casting to check it was all working properly, and it snaps in my hands at the spigot. I rig up my next heaviest rod and the same thing happens. Aeroflot’s baggage handlers had not been kind to my rods and the protective tube had failed at one end, causing the rods to be crushed at the joints with the damage only apparent when under load. I had one suitable rod left…

First cast with the one remaining rod, and the bait gets eaten pretty fast from a very large fish. But the fun doesn’t last for long as the massive arapaima leaps from the water a minute or two after hooking up, shaking its head as it crashes out of the water and riding itself of my barbless hook. The next cast goes in the same spot and, after a few minutes, the same thing happens and it’s game on.

The fight lasted 45 minutes and twice we had to get in a boat to untangle logs and lily clumps from the main line, but eventually the giant arapaima was spent and slowly wallowed alongside the bank where we stood. A few quick photos, a measure (7 feet, 9 inches long), and we parted ways for what is still one of the greatest fishing experiences of my life. For a day or two anyway, because the next stop on our backpack fishing tour was the lake system situated beside Pablo Escobar’s holiday home.

Now Escobar had his big ranch, Hacienda Nápoles – the infamous one with the wild hippos located farther south – but every zillionaire cocaine kingpin needs a little time out of the game, so he also had a holiday home near Guatapé, on the shores of a sizeable complex of lakes which held largemouth bass.

By this stage, we’d given up on the overheating Land Rover and decided the Colombian equivalent of a Greyhound bus was going to get us there faster. A giant rockslide had other ideas and we spent hours sat on a roasting bus waiting for diggers to clear the roads — this happened three times.

Arriving at Guatapé, eventually, we were greeted with a beautiful mountain lake boasting innumerable points, drop-offs and islands — perfect bass territory. We immediately hired kayaks and headed out to a shallow, weedy arm where a small largemouth nailed my Rapala jerkbait the second cast. This was my first largemouth bass ever. Over the next few days, we spent the mornings and evenings exploring the lakes on foot and kayak, catching dozens of small bass on everything from trolled swimbaits to jigs and spinnerbaits.

But the bass weren’t the most memorable things from those little Guatapé expeditions — the birds of paradise showing off in the mornings took top billing, with the 50-cal target practice coming from the nearby jungle also a regular feature. Although we felt safe wherever we went in this stunning country, this was a few years ago when Colombian internal politics still had a more violent edge and regular gunfire was symptomatic of this.

Sadly, with a lot of netting and take of small fish, it seemed few sizeable bass were present in the areas we fished. However, I’m sure that had we ventured further into the uninhabited areas where the big girls had been left alone to grow fat in the warm, food-rich water, we may have found a giant or two lurking. One day I’ll return to find out.

So, when bass fishing tournament time comes around every spring, I think of my first largemouth and how it was probably a little different to most other people’s backyard pond-type experience. I suppose it was from a backyard pond of sorts — just one owned by the most notorious drug runner of all time. Thanks for the bass, Pablo.