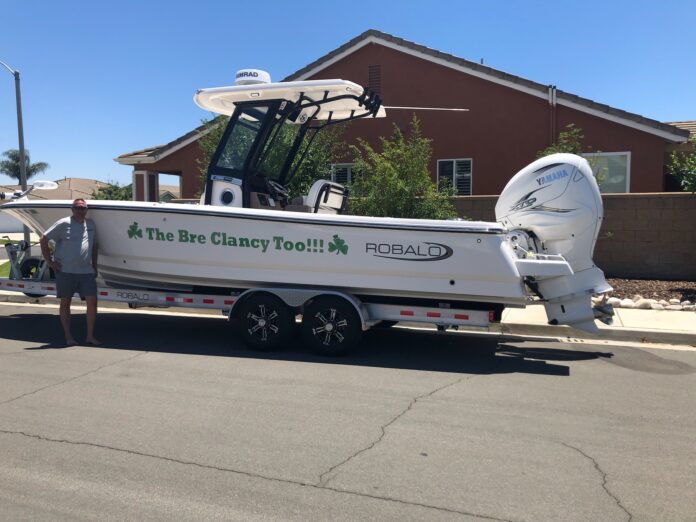 SAN CLEMENTE – Southern California private boater Robert Yakemonis switched from a Defiance Admiral 220 (22-foot pilothouse) to a Robalo Cayman 266 center console prior to this season, and Western Outdoor News reached out to see how the new rig was treating him and what he’s already digging about it after making the significant switch from a pilothouse to a center console, as well as some other advantages of the Cayman in particular that suit his style of fishing.

Here’s what Yakemonis said to WON about this new fishing platform he picked up at California Skier in Lake Elsinore, The Bre Clancy Too!!!

Tell me about the large casting platforms on the Robalo Cayman 266. I hear you can pretty much get a cast off quickly from anywhere on the boat off the bow and stern of boat?
Using tuna as an example, fishing breezers or spots of tuna, when I was in the pilothouse coming up to the spots and getting the boat positioned, when I slid in and stopped, I had to leave the wheelhouse, grab a rod and get myself up to the bow. On the new boat, when we slide up, I have a rod in the rod holder that’s right by the steering column, so I can stop, grab the rod and make a cast. So the new boat is much more versatile. You can also have a guy in the bow, a guy midship and a guy in the stern and there’s no tangles. The Robalo is such a nice platform to fish from.

How is trolling in the Robalo 266 vs the Defiance with the pilothouse?
When I was in the pilothouse, I couldn’t see the rods or hear clickers going off when we got bit. With the Robalo’s open cockpit directly to the rods, I’m much more accessible. If we get a stop on yellowfin tuna, it’s so much easier to step away from the helm and throw some bait to try to bring the fish up to the boat.

What’s an advantage of the lower gunwales on the Cayman?
On the Defiance, the gunwales end at the wheelhouse so you have to step up to get to the bow. On the Robalo, it’s a flat surface from bow to stern, so when you’re fighting a fish you don’t have a step to deal with if the fish takes you from bow to stern. 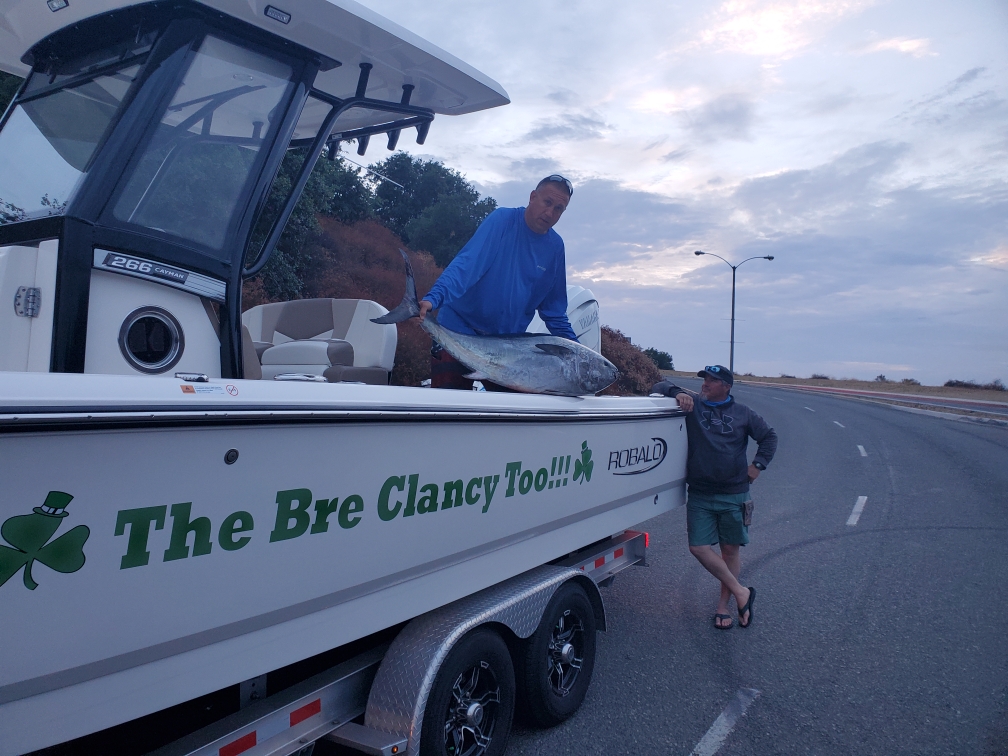 What have you done and what are you doing to do to “West Coast” your Cayman and make it your own?
When it came from the factory, the first thing I did was put radar on the boat. Eisenglass Weather Wings are on the way, and they keep you out of the elements, and then next thing I’m going to do is add additional rod holders.

How is that Simrad electronics suite?
I’m finding the Simrad very user-friendly. I have dual 10-inch screens, and I added a Simrad radar system. It’s all very functional.

Have you used your trolling motor setpoint or drift while fishing offshore?
I have not used it offshore, but I’ve used it quite a bit for fishing the island and for fishing rockfish and local reefs. You no longer have to anchor which is great, and you can pull up to a spot and spotlock on it. It’s so much more convenient. When you’re in a pilot house and trying to drift over spots, you’ve got wind against current and other factors. The catchability has increased quite a bit using the trolling motor and Spot Lock.

How are you liking the Yamaha 425hp V8 on the back of your Robalo Cayman?
I find the fuel mileage between the two boats is pretty similar between 3300 to 3500 rpm, but in the new boat, the speed has increased significantly at the same RPM. If you want to go 40 mph, you can, and it’s nice to know you have the throttle available if you need to move fast. It also allows you to not have to leave at 3 in the morning when you can get 10 to 15 more miles per hour easily and not really hurt your fuel consumption and still get to the zone that you need to get to.

Do you feel you can manage your vessel easier on your own?
I think this boat is easier to manage on my own because I’m at the helm but readily accessible to everything. On the old boat if I was by myself and coming up to a dock, I’d have to coast in and jump out of the wheelhouse. Now I just take a half step and I’m at the dock. I do take the boat out by myself sometimes, so it’s nice to have that functionality. 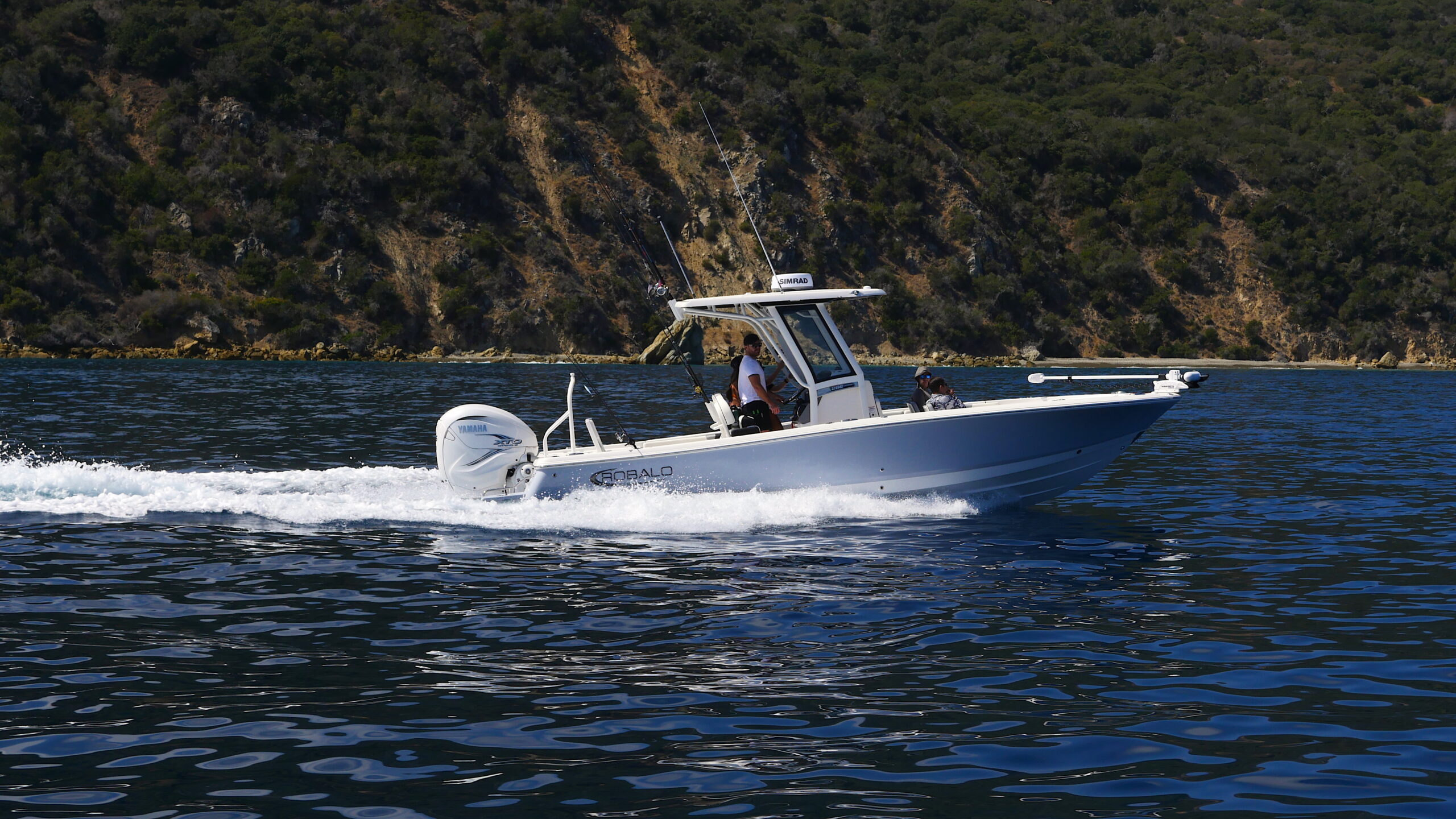