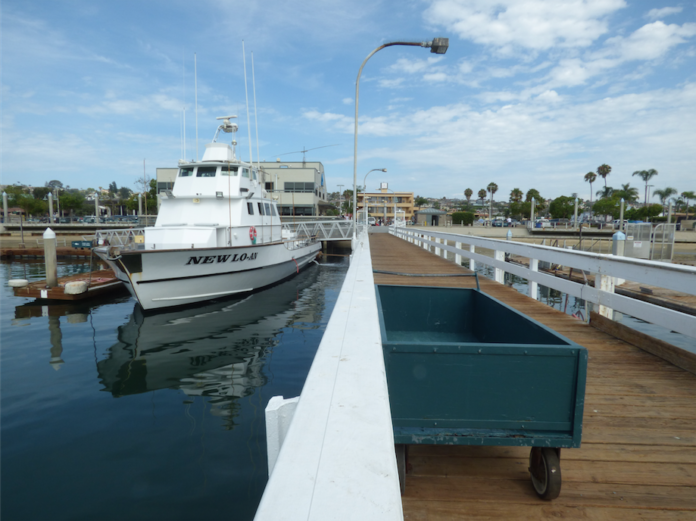 SAN DIEGO/OCEANSIDE — The past week brought word from returning long range trips of bluefin close at hand. In addition, other reports indicated the bluefin are in range already. As a consequence, offshore exploratory trips went up on the books in San Diego-area sportfishing landings.

Rick Scott of the Ocean Odyssey indicated as much in his interview with Rod and Reel Radio Sunday evening. He said there was a good chance weekend 1.5-day trips would convert from Mexican coast cods and yellows to tuna, so come prepared for anything.

Recently live bait had been on the smaller side, so bringing a Flat-Fall stick and iron was a good idea. As for this past weekend, the weather put the kibosh on those weekend trips down the line.

While the local winter bass bite had started as strong as it’s been in the past month, the final days of the reporting period showed much weaker results.

At H&M Landing the Old Glory is slated for a 7 p.m departure Friday evening fishing off shore on a 1.5-day exploratory trip. The Relentless was on line for the 1.5-day coastal fishery.

The Legend was on line for full-day Island trips fishing grabbers to ‘tails. For bass on half- day, the Premier was the boat.

They started this past week with just 15 anglers fishing Monday, catching 52 sandies and 5 calico bass along with 41 sculpin. But on Valentine’s Day, 12 anglers on the afternoon run pulled 40 sculpin but just 15 sand bass.

The Grande was in the ship- yard at Larson’s in Wilmington. At Point Loma Sportfishing, the Point Loma’s best score was on a twilight trip with 18 anglers bagging 18 scorpions, 12 sandies and 3 perch.

At Fisherman’s Landing the Dolphin managed to get off the dock all but Tuesday, and while Monday’s run ran 28 anglers out to tangle with 55 bass, 46 of which were sandies. But Sunday afternoon, 14 folks found just 7 keeper sand bass. At Seaforth Sportfishing, the Sea Watch’s 25 fishing Saturday bagged just 5 sand bass and a sculpin, after starting the week with 22 anglers nabbing 41 bass and nearly 60 sculpin Tuesday.

Up in Oceanside, Helgren’s fleet didn’t fish but the Chubasco II out of the SEA Center managed to get out on a twilight trip with 8 anglers getting sculpin limits.

Sunday evening a pair of squid seiners were fishing a nest off Pendleton and squid nests had shown up along the coast, an auspicious sign for privates targeting seabass.