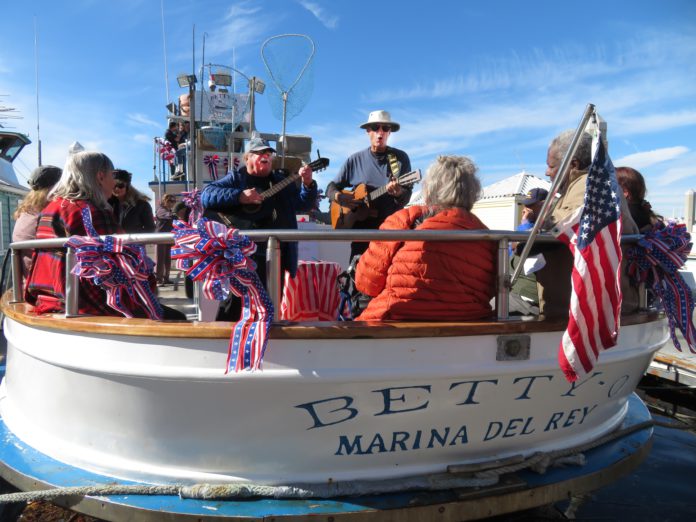 On December 15, 2021, the 65-foot fishing boat celebrated 100 years of service in Southern California waters. Betty O’s owner/operators, Mike and Patty Reinsch, think of themselves as caretakers, sharing a unique experience with fisherfolk from around the globe.

“When we took over the boat back in the ‘90s, there was plenty to do,” said Captain

Mike before the ceremonies got started. “And it seems every day there is more to be done. But for Patty and me, it is something we love to do.”

Some good news following publication of the last Western Outdoor News article about the Betty O (see WON Nov. 26 issue, page 30) is that it appears the boat has been cleared for tier three engine retrofit by California Air Resources Board (CARB). If all goes well, the historic Betty O will be operating for another 100 years in Southern California waters.

Originally running at Catalina Island as a shuttle between Avalon and the Isthmus (Two Harbors) with a capacity of 200 passengers, the boat sported both upper and lower decks for passengers. In 1937, the boat was sold and the upper observation deck removed, and bait tanks and seating at the rail were added as Betty O was converted to operate as a sportfishing boat going forward. In 1966, Marina Del Rey Sportfishing purchased the vessel, where it operates on a daily 3⁄4-day fishing schedule throughout the year.

Many of those trips bring children from around Southern California to fish local waters, some for the first time ever on a boat. Other trips include regulars that come out each week, having done so for decades. Still, other trips benefit veterans and the handicapped from programs throughout the Southland.

Fisherman Phil Bell, a long-standing member of Marina Del Rey Anglers (MDRA) and master of ceremonies for the 100th birthday event, worked with Steve Simon of the Los Angeles Rod & Reel Club (LARRC) to host a celebration befitting the auspicious moment in time shared aboard the Betty O.

To kick things off, LARRC member and owner of Calabasas Custom Catering, Paul Varenchik and his crew, served up hot dogs, burgers and ribs from his ranch-sized BBQ set-up

in the Marina Del Rey Fisherman’s Village parking lot. Plates were filled with BBQ and all the fixings, then taken down to the boat to enjoy the beautiful day at Marina Del Rey on board and alongside Betty O.

With lunch completed, the group assembled on board to participate as Rabbi Miriam Hamrell, of temple Ahavat Torah blessed Betty O and those who will come to fish on her for another 100 years.

Captain Mike, one of 14 siblings, enjoyed having a couple of his sisters attending, and the pair helped throughout the event. Up on the bait tank, Capt. Mike recited a chronicle of the past lives of Betty O while Fisherman Phil and company interspersed the history lesson with renditions of a song, written specifically for the 100th anniversary event. A few members of Mike and Patty’s church came out to celebrate, including 91-year-old Helen-Slayton Hughes, who authored the lively lyrics to the “Ballad of Betty O.”

The two sponsoring clubs, MDRA and LARCC, came together for this event and presented a plaque commemorating the “100th Birthday” of Betty O with a special thanks to Mike and Patty Reinsch and the dedicated crew.

The two clubs work to organize veterans fishing trips aboard the sportfisher throughout the year, partnering with generous donor Larry Brown to share costs for the outings. Having worked together to make the celebration a success, both clubs are discussing teaming up to get even more veterans out fishing in the coming season.

Cutting of the birthday cake marked the end of the day of celebration, making attendees a bit emotional. For those who have spent time on the storied decks of Betty O, each day at sea fishing at her rails makes any day a time for celebration. Contacts: