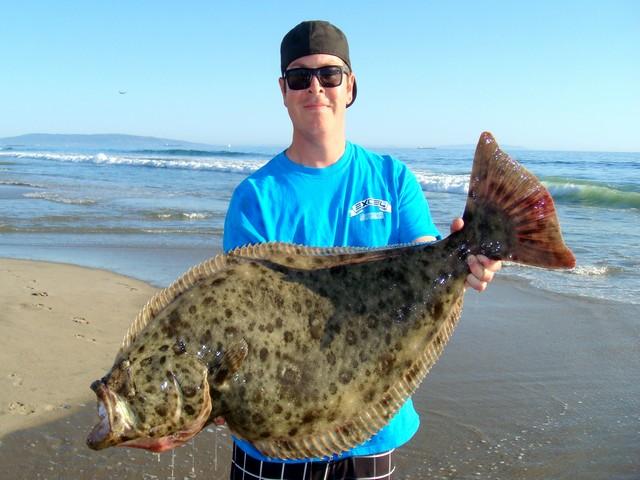 SANTA BARBARA— The halibut were on the bite this week, according to Hook, Line and Sinker. Anglers reported good catches on most beaches. Two grunion runs and the gradual warming water has drawn the fish shallow. On the open beaches, Flash Minnows and X-Raps have been the top lures. The bait soakers are scoring with cut anchovy. The stretch near the Goleta Pier has been a better one but other spots like Graveyards, Butterfly Beach, the harbor mouth and Carpinteria producing. Lots of fish in the 18- to 28-inch range with a few fish over the 30-inch mark. With more grunion runs and continued warming water temps the bite should only get better. The barred perch bite has been good for numbers but lacking in size. Most anglers post a limit or near limit but the bulk of the fish have been under a pound with only a few exceptions. All manners of baits are working including lugworms, mussel, shrimp and cut, salted anchovy. Grubs and Gulp! Sandworms are also getting bites. East Beach, Graveyards, Carpinteria and Silverstrand have been good spots. Anglers soaking squid on the reefed beaches reported taking a mix of shallow water rockfish, cabezon, calico bass and yellowfin croaker.

MALIBU– The shop held another Uptown derby on Saturday, according to Wylie’s. The group encountered tough conditions with wind and swell commanding most beaches. Ripping current also made it hard for a sinker to hold. The group did catch fish, landing lots of smaller barred perch under a pound, some chunky yellowfin croaker, a couple small corbina and a giant buttermouth perch. The anglers fished baits like lugworms, shrimp and mussel and even threw Lucky Craft. For the third derby in a row, a fish was not weighed. It has been a common complaint this season, lots of smaller perch but few big spawning hens. A small number of ripe fish have been noted but not a full scale spawn as of yet. The bite on the reefed beaches has improved but conditions can vary from spot to spot. It is a good idea to move around if you are not getting bit. Anglers report taking a mix of sand bass, big yellowfin croakers, shallow water rockfish, some nice cabezon and small leopard sharks. The bite has been good if you find the right spot. Big Rock, Pescador and Matador have been better places to look. More and more halibut have been showing on the open, sandy, beaches. Lots of shorts but more legal size fish are showing. A shop regular took 2 shorts of 20- and 21-inches on cut sardine fished off Malibu.

REDONDO BEACH– The barred perch bite has been solid with improving conditions and warmer water temperatures, reported Just Fishing. Most anglers are posting limits on fish ranging from 4- to 6- inches with a few better kickers. The grub bite has been good with standard root beer and motor oil colors working well on a carolina rig. The stretch near the Hermosa Pier has been a good one but good catches were also reported from Manhattan and El Segundo. A couple legal halibut were taken off Torrance Beach on Flash Minnows. The incoming high tide was best. A grunion pattern has been tough to beat. More fish are showing on other south bay beaches. Harbor anglers have also been getting a few halibut on cut anchovy. Soaking the baits on a strong tide swing has been the ticket. A few sand bass and yellowfin croaker have also been in the mix. Warming water had the sharks and rays active off Dockweiler.

SEAL BEACH– The halibut bite continues to improve according to Big Fish. Anglers found legal fish on several different beaches. Shoreline Drive and Cherry Beach has been a good stretch holding a good mix of shorts and legals. Dog Beach, 72nd Place, Bosa Chica Inlet and Huntington Bluffs have also kicked out legal fish. Flash Minnows have been a top fish finder on the open beaches. On the protected beaches and calmer waters, small swimbaits, Zoom Flukes and cut anchovy have been taking fish. Still lots of shorts but the percentage of legal fish is increasing. Big fish of the week was a 30-inch model taken off Ballast Point on a piece of cut anchovy. The barred perch bite has been good but the fish have been small, mostly palm-size. Gulp! Sandworms have been hard to beat. Anglers soaking bloodworms off the Seal Beach Jetty have been taking a mix of yellowfin and spotfin croaker. The fish have been ranging from 1- to 3- pounds and biting on the incoming high tide.

NEWPORT BEACH– Warming water and lots of bait had the halibut on the bite this week, according to Ketcham Tackle. Anglers reported many more bites in the surfline. Flash Minnows have been the go-to search bait. Working the lures around the street jetties and over the holes and trenches at River jetties has been a good bet. Most fish are ranging from 18- 25-inches with a few better kickers to 29-inches. The ms anchovy pattern has been hot. Krocodiles have been another good lure slow rolled over the bottom. Newport Harbor anglers are also scoring a few legal fish. The better action has been near the harbor mouth in the main channel. Cut anchovy and live smelt have been the top baits. The barred perch bite has been good all along the peninsula. Most of the fish have been small but a few better fish over a pound have been taken between the piers. The grub bite has been good with clear/red flake and root beer/ gold flake colors working well. Good catches were also reported from River Jetties and Newland. The spotted bay bass are getting active in Newport Harbor.

DANA POINT— The halibut were on the bite on Capo Bay beaches this week, according to Hogan’s. Good catches were reported from Doheny, Lifeguard HQ, T- Street, State Park, Cottons Point and San Onofre. A shop regular reported catching and releasing 3 legal fish on Friday below the harbor. A cherry berry pattern Flash Minnow was the hot lure. Grunion, metallic sardine and ms anchovy have been other good color choices. Top catch of the week was a 33-inch slug taken on a jig para fished near Cottons Point. Another 30-inch fish was taken off the short jetty on a piece of cut anchovy. The barred perch bite has also been good with most anglers posting limits. The fish have been small in Capo Bay. Your best chance at a better model has been off south Laguna, Stands and Salt Creek. A few fish over a pound were taken here. The long rodders are taking a mix of yellowfin croaker, spotfin croaker, sand bass, barred perch and small leopard sharks on lugworms fished outside the breakers at Rivieras.

OCEANSIDE— The halibut bit continues to improve along this stretch, according to Pacific Coast. Anglers reported catches on the beaches, in the lagoons and in Oceanside Harbor. Warming water and a series of grunion runs has bolstered the bite in the shallows. Flash Minnows are tops on the open beaches. There is a good portion of shorts but plenty of legals. Lagoon and harbor anglers are scoring with swimbaits and flukes or cut anchovy. Some of the larger fish in recent weeks have come from the lagoons. The dredging operation is wrapping up in Carlsbad Lagoon. Look for this body of water to light-up with hot fishing. Deeper channels result in increased water flow attracting large schools of foraging bait. Anglers fishing the Oceanside Harbor jetty are scoring a nice mix of yellowfin and spotfin croaker. Lugworms and bloodworms have been taking fish to 3 ½ -pounds. The barred perch bite has been good but mostly for smaller fish under a pound. Gulp! Sandworms have been hard to beat.

SOLANA BEACH— Ponto kicked out a couple of double digit halibut this week. Both fish were taken on Flash Minnows fished on a low incoming tide. Warming water and lots of shallow bait has prospects improving. Other halibut catches were reported from Cardiff, Torrey Pines and Mission Beach. The lagoons and Mission Bay are also holding good numbers of fish. Cut anchovy has been hard to beat here. Some anglers are scoring a better model by making, then fishing live smelt. More grunion runs are to come and some water temperatures are pushing 62-degrees. The bite should gain legs in the next few weeks. Mission Beach has also been kicking out limits of barred perch. The grub bite has been good with root beer and motor oil colors getting bites. Most of the fish are ranging from 4- to 6- inches with a few kickers topped by a 12-inch fish. Some of the better models seem to be orienting around structure.