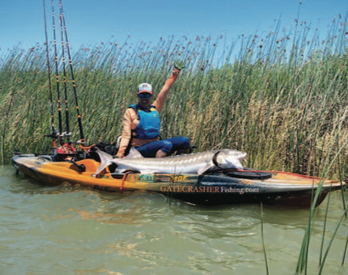 Growing up in Northern California, I’ve fished by boat and land on lakes, rivers, bays and ocean. However, in recent years I was introduced to kayak fishing by my co-captain Virginia Salvador. I’ve got to be candid. My first knee-jerk reaction to the idea of kayak fishing was not a positive one. All I could think about was how much more water one could cover with a power boat and how inefficient kayak fishing was. After all, you have zero horsepower other than the power you possess in your legs and arms.

On my first outing, Virginia invited me to kayak fish a local stream for smallmouth bass with her and friends, and I reluctantly accepted. It was after this experience that I completely understood the different experience kayak fishing offers, as I believe kayak fishing is a deeper connection to nature than what can be achieved by powerboat. You are one with the water. The way you can glide across the water’s surface in silence allows you to see so much while quietly paddling over the top of very visible bait balls or schools of fish. In the early morning hours, you will often see wildlife like bobcats, bucks, coyotes, beavers and otters along the water’s edge that are oblivious to your presence. There is also something that resonates deeply into our human selves when we use tools that are stripped down but effective like a longbow, or a black powder rifle.

After many incredible trips with Virginia for mostly freshwater species, she confided in me about her ultimate kayak goal. Unbeknownst to me, she was on a quest to catch the largest anadromous fish in Northern California by kayak! She informed me that she had made many attempts but was unsuccessful with one exception. Her last trip she came really close when she hooked a big white sturgeon that exploded on the surface immediately after hookup, but unfortunately spit the hook. I’ve always had a special love for white sturgeon and have fished for them for more than three decades, so when she asked me if I’d like to join her on her next kayak attempt, I was 100 percent in!

We decided to fish in Montezuma Slough to take advantage of the wind break the slough often provides. Once we got on the water we paddled effortlessly for almost two miles, graphing various contours while looking for large fish marks on or near the bottom on our Furuno FCV 628. It’s amazing how you can travel great distances by kayak with minimal effort due to the gearing of the Old Town pedal drive on the Sportsman Big Water PDL 132. We finally find a group of sturgeon that are mostly on the bottom and we anchored below them with our 11-pound Lewmar Claw Anchor attached to a quick release with a fluorescent crab float. We dropped one anchor, and Virginia side-tied her kayak to mine. We baited up and got our lines in about an hour before the flood. Virginia instructed me that if we were to hook up, she would unclip from the anchor we would let the sturgeon take us for a sleigh ride!

We had several large sturgeon breach the water’s surface around us and our excitement grew with every sturgeon that passed underneath us on our fish finder. We watched our rod tips with laser focus waiting for that classic sturgeon pump. Sturgeon will often bite very light but with a slight rhythmic action you will see on your rod tip. I asked Virginia if she had brought us any snacks, and while she was shuffling through her Yeti soft cooler, I saw what looked like the tiniest nibble on Virginia’s rod tip.

I told her, “Quick, look, I think you have a customer!” She dropped her grapes into the water and got her hands firmly on her rod without disturbing her bait. I next see her rod tip dip again, and Virginia reared back on her Gatecrasher Series Super Seeker 270-8, followed by some fast reeling with her Accurate BV-400 filled with 65-pound braided line, and we were tight on a solid fish! Her fish took off and was peeling line. It was at this time I unclipped us from the anchor and reeled in my line and followed her while filming as she was being dragged down the slough. It’s amazing how stable these Old Town kayaks are as Virginia battled trying hard to not give up an inch. She has caught hundreds of sturgeon on our charter boat, but this was very different. The fundamentals change when you use your upper body instead of your legs to battle one of these fish. You basically go where the fish wants to go, and fortunately where they generally like to run is in the deeper parts of the water column. We were at the 16-minute mark when Virginia was finally straight up and down on this fish. It was at this time we finally saw lots of big bubbles rise to the surface. Sturgeon, right before they’re completely exhausted and ready to be landed, will often belch large amounts of air.

After a few more times of reeling her rod tip down into the water and leaning straight back she finally broke her sturgeon’s will and she now had him at the surface! The fish was a very well- fed slot fish of 59 inches. We fish catch-and-release for white sturgeon so after we placed this fish on the surface of her kayak for a quick picture, it was released, and her kayak goal was officially crushed!

After much celebration we paddled back to our anchor buoy and clipped ourselves back on followed by rebaited to see if I could catch one. We had just a little bit of incoming tide left. We waited and waited but as our kayaks began to sway in the wind and our lines began to slack, I figured the window of opportunity was closing fast. Soon we would be approaching the dreaded slack tide. Should an opportunity present itself, I decided to take my rod out of the holder and instead hold it in my hands in an attempt to see if I could feel the bite.

I tell Virginia we have 15 minutes and then we are heading in. I did all I could to stay focused during this last moment of our trip. Five minutes later I feel a little something and yell out to Virginia, “I think we have another customer”!

I got ready and on the next light tap I swung for the fences and yes, we were tight again!

This time we decided to fight this fish from anchor. It didn’t take long for me to realize this fish was very oversized! After doing our best to stay calm and work together, we battled and landed another beautiful white sturgeon that was way too big for an out-of-the-water photo. We filmed the battle and took a few pictures, at which time our fish gave one more mighty jerk of its head that snapped my grip and out of sight it went.

With both of us having a successful outing crushing not one, but two ultimate kayak goals, we pulled our anchor and rode back to the launch with our backs a little tired but our spirits riding high.

This was an experience that I will never forget and hope to repeat many more times. I highly recommend kayak fishing to anyone interested. Like all watercraft adventures I strongly suggest getting educated about water safety, proper gear like our Mustang Survival’s type V life jackets, and if possible, going out with another experienced kayak angler.

In Northern California we have an excellent kayak club you can join norcalka yakanglers.com. NCKA has members who are very knowledgeable and more than happy to share with you the sport and what you need to be safe. A YouTube video of this adventure is available at youtu.be/n9zCofcsVf0.