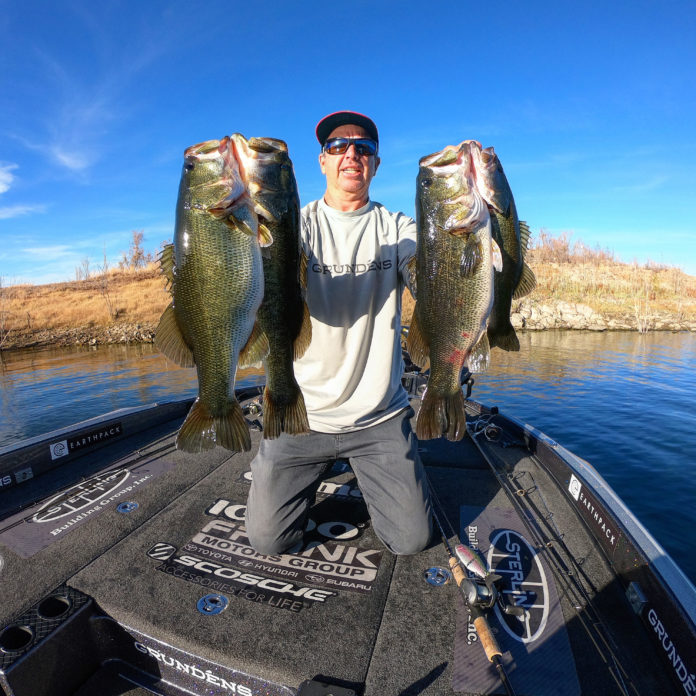 HEMET – A load of Mt. Lassen trout was dumped into Diamond Valley Lake on Jan. 5, which sparked limit-style fishing a day later and a sustained pick on quality rainbows and lightning trout in the days that followed. On the non-trout side of things, largemouth and striped bass are being caught by those who know where to look for them.

The plant consisted of 3,000 pounds of rainbows and 500 pounds of lightning trout, and the fishing solid for both quality and quantity with numerous catches in the 8-plus-pound range reported to go along with plenty of limits.

James Leon and his crew of CML Baits staffers all ran into limit-style fishing with kicker fish up to 8 pounds while casting dark-colored CML minijigs from shore. Angler Brian Ray also stuck an 8 pounder and a couple lightning trout while dunking rainbow PowerBait, and Tracy Hartman stacked up a limit by 9 a.m. on stock-day-plus-one on jigs in white and grasshopper thrown from shore.

Per the usual, almost all of that trout action took place around the coves and points
to the right off the marina, but some fish were caught by boaters working just out of bank-angler casting range and by shoreline fishermen working the bank that leads up to the East Dam.

Largemouth bass have been in winter mode for a while now, and local guides and clients are getting the best of this deeper bite. Among them are Rusty Brown (RustyBassHook.com) who told WON his clientele are getting them drop-shotting 6-inch Roboworms and jigs with creature-bait trailers on rocky points with easy access to deep water. Todd Kline (ToddKlineFishing.com) also put together a solid bag on a recent outing on DVL, and he was also going deep with finesse stuff.

WON Field Reporter Brady Garrett hit DVL for a shoreline swimbait session, and despite not connecting to a bass or striper, he was treated to quite a show from largemouth and linesides harassing stocked trout right off the bank. His soft-plastic trout imitation did get swiped at several times and is now sporting some fresh bite marks, and he was already planning his next visit, convinced the big-bait bite might finally be ready to pop. Mike Southerland of Fish On Guide Service is back to putting up multi-fish half days out there with flies trolled on leadcore down around 55 feet deep, give or take. He’s also been picking up the odd smallmouth bass as bycatch while doing that.