Complete standings can be found at wonbassevents.com

Laughlin, Nev. – October 11, 2022 – When the second day of the 2022 Bass Cat / Mercury WON BASS U.S. Open presented by Laughlin Tourism Commission and Visit Laughlin began, the setting was nearly identical to the warm, slick conditions that greeted the anglers on day one.

With the temperatures and high skies mirroring day one, the same could be said for the top of the leaderboard as Arizona pro Josh Bertrand held onto his lead with another limit of smallmouth that eclipsed 20 pounds.

Pre-tournament logic said that someone would bring in a 20-pound bag, but many wondered if it would be a feat that was repeatable. Bertrand proved that it was by backing up his 23.45-pounds day one limit with 20.39 pounds to retain his lead on day two with a total of 43.79 pounds.

Bertrand, who revealed that he had been holding some areas for the final day of competition on day one, had to touch those areas today.  “It was a tougher day for me today numbers wise, and I had to expand on my approach a little,” said Bertrand.  “I didn’t have to lean on the areas I’d been saving, but I did have to add a couple fish later in the day to top 20 pounds.”

He added that he feels good about the final day.  “It’s no secret that I’m using one of my confidence baits, and I have good areas, so I feel like I have a good chance,” he said.  “If I can put my Berkley Flatworm in front a enough smallmouth, I feel like I’ll give myself a chance to close it out.”

Arkansas Major League Fishing Big 5 Pro Circuit Title Champion Spencer Shuffield from was the final angler to weigh-in, and the Arkansas pro put an exclamation point on day two.  Shuffield brought a 20.73-pound limit to the scales to jump into second place with 39.43 pounds.

Shuffield, fresh off his MLF Tackle Warehouse Pro Circuit Title victory finds comfort in his settings.  “I’ve always looked forward to fishing the U.S. Open, and Mohave is an amazing smallmouth fishery,” he said.  “I have been expanding on my areas every day, and I feel like if I can do it again tomorrow, I’ll have a chance.”

Hot on his heels in third place is three-time WON Bass U.S. Open champion Clifford Pirch, who posted his second consecutive 19-pound limit to finish third with a total weight of 39.36 pounds heading into championship day.

Patrick Touey, who started the event in second place fell to fourth place with a 17.33-pound limit to push his two-day total to 37.75 pounds, and Todd Kline caught 19.54 pounds to push his total weight to 36.31 pounds to round out the top five in the pro division.

On the AAA side, day one leader Kyle Keegan added 11.48 pounds to keep the day two lead with 34.93 pounds. Jim Vretzos weighed 19.89 pounds to end the day in second place with a total weight of 31.74 pounds.

Complete standings can be found at wonbassevents.com 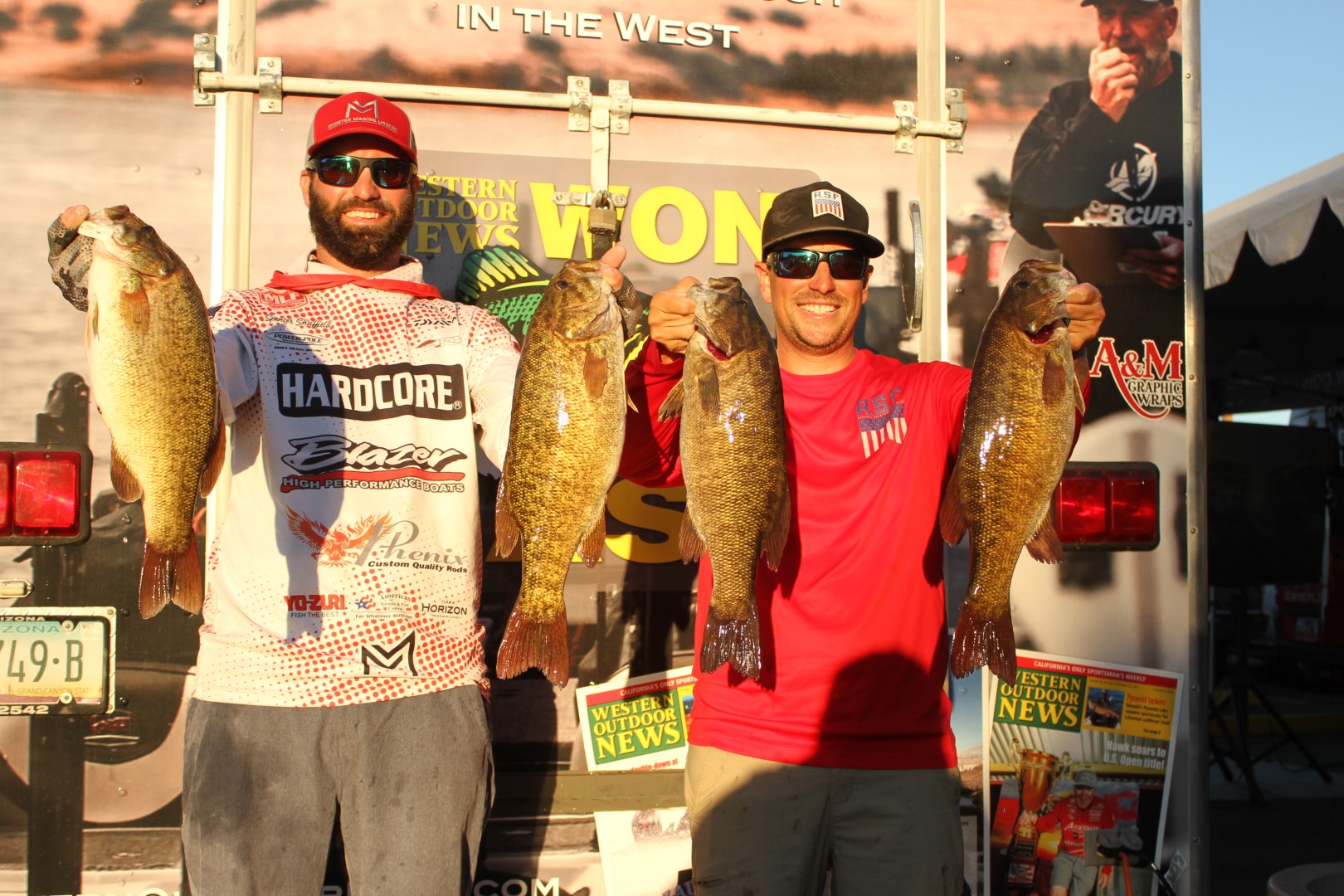 Laughlin, Nev. – October 10, 2022 – For the first time in its history, the Bass Cat / Mercury WON BASS U.S. Open presented by Laughlin Tourism Commission and Visit Laughlin is being held at a fishery other than Lake Mead as a result of historic record low water levels.

With those developments, the City of Laughlin, Nev. was at the ready to host the event and Lake Mohave stood as the new playing field for the 40th Anniversary of the most prestigious bass fishing event in the Western United States.

With the change in scenery, the possibility existed for heavier weights to be presented at the tournament scales at Katherine Landing.  At any desert fishery, there’s always the possibility for high winds and big waves, and rarely are slick conditions are the reality.  However, high skies, slight wind and slick water was what greeted the anglers on day one of the event.

But this field always features some of the best anglers in the west, and where there are bass, the field will show out. That is precisely the outcome of the day’s competition.

Leading the pack on day one was Arizona Major League Fishing BPT pro Josh Bertrand who brought 23.45 pounds of smallmouth bass to the scales. He and his day one AAA partner Kyle Keegan spent the day running through their areas and culled through a pair of limits to set the pace.

Bertrand declined to state what his exact pattern was, but said he feels comfortable with whatever the conditions present.  “I can fish fast if I need to or slow down depending on the conditions,” he said.  “My practice was good, but I wasn’t sure exactly what kind of weights to expect, so this is a really good start.”

Patrick Touey, who is fishing his first event on Mohave and his AAA partner Chuck Turner spent the day cycling through several areas looking for active fish and found enough smallmouth to bring 20.42 pounds to start the event in second place.  “I started practicing on the bank and didn’t like what I found, so I looked deeper and found some deeper grass to target,” he said.  “We’d pull up and find them there, catch a few and move on to the next spot; it was a good day.”

Sean Coffey and Fisher Griffith weighed in 18.97 pounds to put them in fourth place and Dylan Maxon and Dave Phillips posted 18.89 pounds to round out the top five.

Complete standings can be found below.

Day two of the 2022 Bass Cat / Mercury WON BASS U.S. Open presented by Laughlin Tourism Commission and Visit Laughlin will begin Monday, October 10, with a champion being crowned on October 12 at the conclusion of the final weigh-in. Takeoff with nearly 189 pro and AAA anglers will commence at safe light and weigh-ins will occur in the afternoons each day. Takeoff and weigh-ins will be held at Katherine Landing at Lake Mohave Marina located at 2690 Katherine Spur, Bullhead City, AZ 86429.

Join us for an historic event and look to wonbass.com and WONews.com along with WON BASS and Western Outdoor News social media platforms for event details and updates.