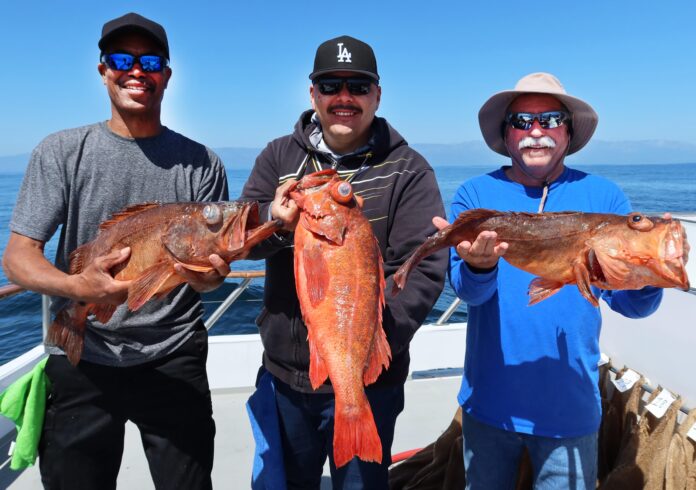 VENTURA — So much is at stake in the annual battle royale known as the Western Outdoor News Rockfish Rumble, this year was bound to be a sellout for all three boats in the competition.

Scheduled as an early season bout, the 2022 iteration of the contest had boats fishing down to the limit of 100-fathoms, or 600-feet. Ventura Harbor Sportfishing owner-operator and legendary sportboat captain, Tucker McCombs, sent out three boats to go the distance and fight for a win in the 2022 WON Rockfish Rumble.

Dropping down to the deep waters at The Dome, a reasonably high spot out in the open water between the mainland and the Channel Islands, anglers pulled no punches as fish began to hit the deck.

Pacific Eagle, Island Spirit, and the latest addition to Ventura Harbor Sportfishing fleet, Californian, loaded up anglers, leaving the dock on schedule at 5:00 a.m. Getting dramatically differing results, the boats had similar strategies for fishing the 3,000-foot deep-water Santa Barbara Channel between Santa Cruz Island and the mainland. The choice to fish these open waters rather than run out to any of the Channel Islands, was a tactic delivering markedly differing results, with one boat blowing away all challengers.

Up for grabs was a $100 HUK clothing gift card and a 500-yard spool of Berkley Pro-Spec Braid to the angler hitting hardest and landing the big fish on each boat. The angler left standing with the next largest fish on each boat took home a Plano Z-series lure wrap bag.

But for those in-it-to-win-it, the event was all about the cash. Prize money of $460 and top honors would go to the one outstanding blow delivered by that angler still standing at the final bell with the biggest rockfish. The second place fish took home $300, and third place received $180.

The CenCal Gold Coast served up an early morning fog in light air and just a riffle on the water at the starting bell for round one.

Captain Cody Rogers made the first drifts aboard the 70-foot sportfisher, Island Spirit, for anglers looking to deliver a knockout punch, hoping this deep water could hold big fish willing to take their baits. Quickly the rail filled with bent rods as reds, chucklehead and assorted rockfish came over the rail, hitting the deck hard, down for the count.

A short distance across the open water, Californian, the 65-foot sportfisher recently added to the card, could be seen settling in for a first-round drift. Seasoned SoCal skipper, Captain Steve Virtue, set up and anglers took their fighting stance at the rails.

Finding numbers was the goal for the boat and at the end of the fight the count showed 365 rockfish and 1 rock sole for the days battle. WON rep, Dylan Depres, reported from the decks of Californian and the report showed these anglers were ready to fight.

“Fishing deep gave us a constant flow of fish with a red taken by angler, Cuong Hui the largest fish of the 2022 Rockfish Rumble for Californian at 3.99-pounds,” reported Depres. Second aboard Californian was Joel Paullin’s red at 3.54-pounds.

“Pacific Eagle (owned and skippered by Captain Mike Mings) boated 150-rockfish and assorted other critters for the day. Angler Gary Bednorz knocked out a 5.66-pound bocaccio for top fish on the boat and Larry Johnson’s red took second at 4.62-pounds” reported WON staff editor, Ben Hervey-Murray, from the decks of the 55-foot sportboat.

The landing had loaded the tanks of all three competing boats with plenty of live anchovy, and each had cut squid strips available for anglers to pin onto their hooks. Whether ‘chovies or squid, bait beat out hardware for this fight. Using jigs and swimbaits, brightly colored irons and shiny diamond jigs, just would not hit the mark. But a standard two-hook gangion and 16-ounce weight knocked out more fish than any other rig for anglers in the Rumble.

Several moves by Captain Cody Rogers took Island Spirit a distance from the other boats and gave up winning fish, if not the total numbers he wanted. The totals at weigh-in showed 202 rockfish and a single rock sole for the boat with 35-anglers aboard.

“It’s been a tough day, but I think we got it done,” called Captain Cody at lines up, just past 1:00 p.m. The scratch and battle to the finish had given angler Karl Penson a beast of a bocaccio weighing in at 6.92-pounds and overall-second place for the Rumble. Penson took home $300 cash and a Plano Z-series lure wrap bag.

Jeff Petrin tossed onto the Island Spirit deck a 5.80-pound bocaccio for a strong third place finish overall and $180 cash, soaking squid strips on a shrimp-fly rig.
But aboard Island Spirit, it was Peter Nguyen who beat them all, knocking out 93-anglers in the process. The hard-hitting rumbler sacked a red weighing in at 7.67-pounds to best them all and take home $460, a $100 HUK clothing gift card and a 500-yard spool of Berkley Pro-Spec Braid.

The three boats had danced around the ring, fishing the deep-water zone between the mainland and Santa Cruz Island, and frequent WON charter anglers Manny Lozano, KJ Kevrette, and Mark Ginchereau had their share of the action, filling sacks throughout the day.

Aboard Californian and Pacific Eagle anglers fought hard to get into the prize money and in the end, prizes were spread across all three boats but with Island Spirit sweeping the overall 2022 WON Rockfish Rumble.