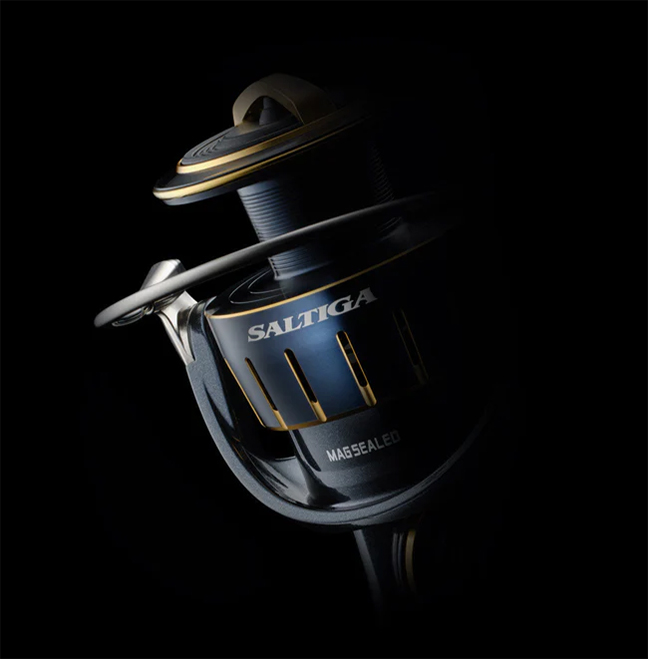 Infused with unmatched technology, DAIWA Saltiga is the most powerful, smoothest, and longest-lived saltwater reel ever.

Originally introduced in 2002, and updated in 2020, the Saltiga set a new standard for heavy-duty saltwater spinning reels and has been endlessly improved over its twenty-one-year history. Now, driven by demand from inshore and nearshore anglers, the warship Saltiga is available in new 4000, 5000, and 6000 sizes.

Saltiga yields the most advanced features ever, established on DAIWA’s inimitable monocoque body. Monocoque is a structural system used widely in military and boat-building applications, whereby internal loads are supported through the external skin. Think of the symmetrical design of an egg; the single-piece high-strength aluminum body of the Saltiga can house much larger internal gearing, meaning more power to tame saltwater beasts. 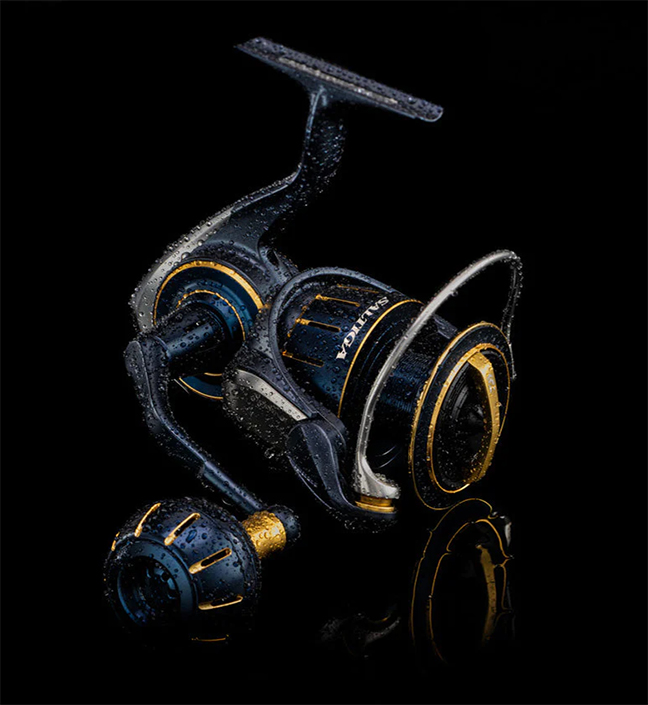 This monocoque design incorporates the one-piece frame with a one-piece threaded side plate. Because screws are not necessary to attach the side plate and hold the main gear, its interior space is greater, allowing for larger, more powerful gears held in place by the lighter, sturdier body and side plates.

The monocoque body also boasts a novel rear cover design, eliminating screws from the underside of the reel to fortify against the intrusion of moisture or contaminants. Sophisticated paint and finishing processes also afford increased durability to the Saltiga’s cosmetics, delivering enhanced corrosion protection.

Housed within the monocoque body is the illustrious G1 Duralumin cut Digigear system. Digigear is digitally developed gearing with bigger teeth and more touch points to yield gear strength and torque more than double its predecessors. Digigear transmits the power of the handle directly to the rotor with smoothness and efficiency. 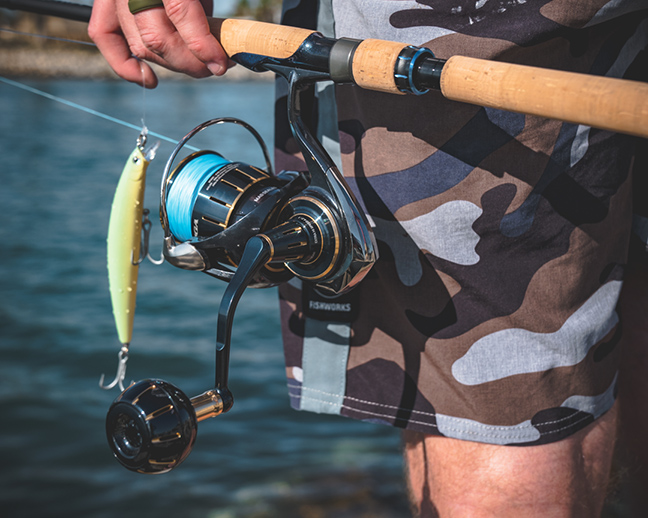 Speaking of the spool, ABS is DAIWA’s exclusive reverse tapered spool design that reduces casting friction for longer and easier casting. The spool’s maximized core diameter and reversed taper mean 100% useable line, with no more “dead” line buried in a deep core. You can fill it with line right up to the edge of the spool lip without fear of tangles.

ATD (Advanced Tournament Drag) is DAIWA’s cornerstone drag technology. ATD implements structural changes to the spool metal to provide greater support of the spool across the entire length of the main shaft. This additional support reduces spool twist under heavy load, promotes more even pressure on the drag washers, and ultimately reduces “pulsing” of the drag when fighting fish.

Implementing a high-density woven carbon impregnated with specially formulated grease, the combination creates a remarkably smooth and fluid drag across all levels of pressure. 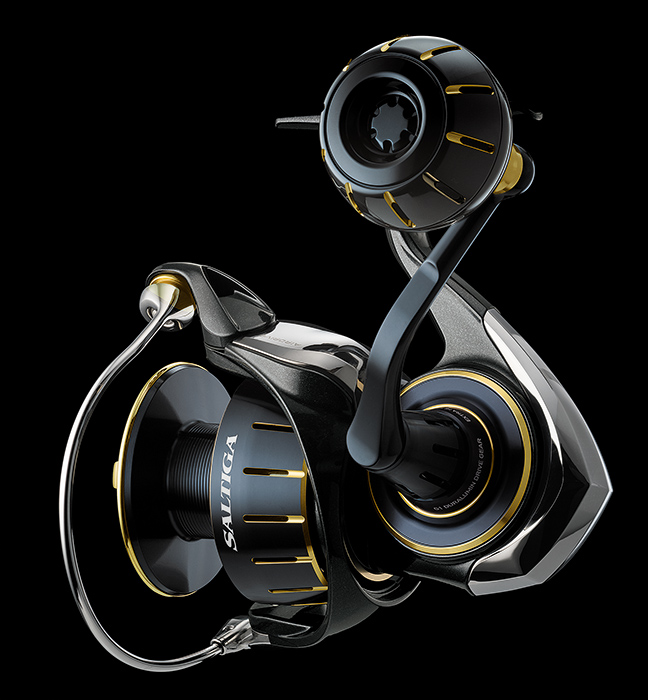 The extremely water resistant Saltiga also utilizes DAIWA’s Magsealed patented technology to apply magnetic oil that can change density and shape when a magnetic field is added. When Magsealed technology is applied to the main shaft and/or line roller of a spinning reel, it produces a low-friction seal that keeps water, dust and grit from disrupting the internal components of the reel. The result is a watertight seal with much lower resistance than conventional rubber seals.

The Saltiga’s Air Rotor stands out for its balance, toughness and sensitivity. The arched profile and 15% weight reduction compared to standard rotors offers optimal winding smoothness and eliminates vibration thanks to the lowered center of gravity. 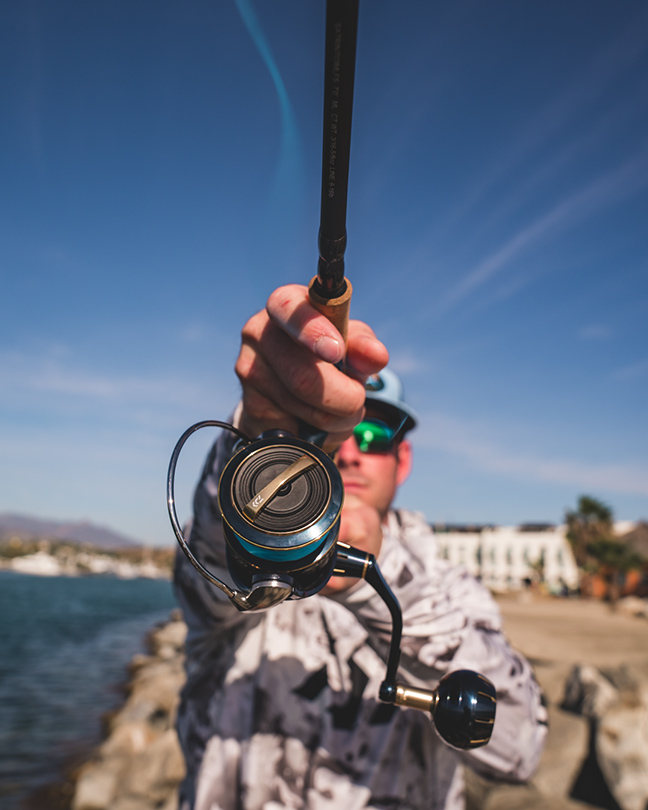 Likewise, the hollow touch Air Bail is made from SUS303 steel and is 20% tougher than a solid titanium bail of the same weight, while lasting up to 13 times longer.

Made in Japan and bulging at the seams with exclusive DAIWA technology and design excellence, Saltiga sets the standard for unfaltering performance, strength, and power in saltwater spinning reels.